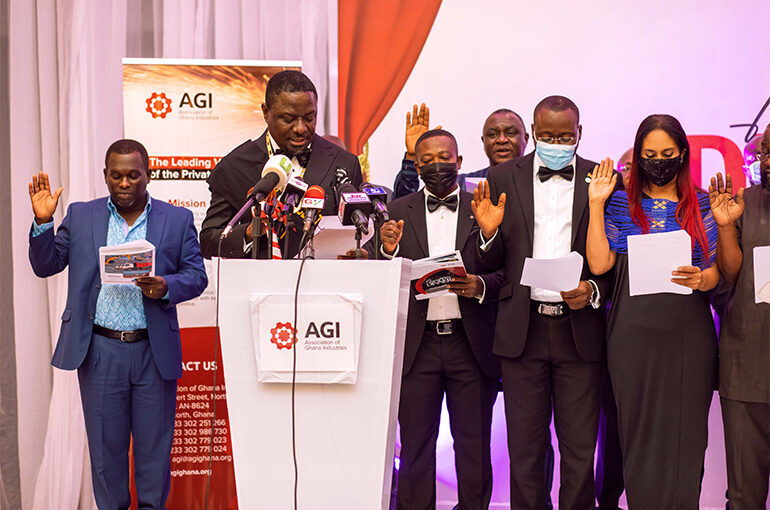 New Executive Council Members of the Association of Ghana Industries (AGI) were last Friday January 14 sworn into office. The Council is led by its newly elected President, who served as the longest-serving board member of the AGI, Dr. Humphrey Kwesi Ayim Darke.

The 39-member Council consists of CEOs from all sectors of the economy including the Executive Chairman of the Tobinco Group of Companies, Elder Nana Amo Tobbin I, who is representing the Pharmaceutical sector. Other prominent members include Dr. Joseph Siaw Agyapong and Mrs.

Sylvia Owusu-Ankomah representing the Environment and Sanitation and Beverages industries respectively.
At the colorful investiture and dining held at the Kempinski Gold Coast City Hotel, Accra, on Friday graced by Ministers of State including Minister for Trade and Industry, Alan Kyerematen, the Newly elected President, Dr. Humphrey Kwesi Ayim Darke, expressed his profound gratitude to members and promised to work to position the association at its ultimate spot.

“We in AGI believe in the path of Industrialization, not just because we are the main industrial organization but it is the surest path to create sustainable jobs and ensure economic growth in the medium to the long -term”.

He also outlined that, going forward, some key policy issues the AGI will be pursuing include the re-consideration of the tariff regime that requires industry to subsidize domestic use of power. “It is our opinion that if we are to compete in the African Continental Free Trade (AcFTA) area, we must re-look at our cost of power,” he said.

The Minister for Trade and Industry, Alan John Kwadwo Kyerematen congratulated the new executives and urged them to work with the government for the development of the country.
The outgoing President, Dr. Yaw Adu Gyamfi, urged the new executives to put aside their personal interests and think “all of us” for the development of the country.
The AGI currently has over 1500 registered members across the regions in Ghana.